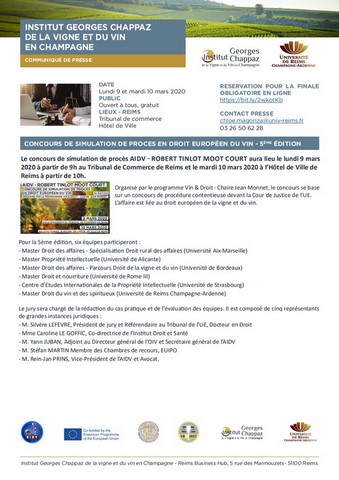 Organized by the Wine & Law Program with the assistance of the Georges Chappaz Institute of Vine and Wine in Champagne and the support of the AIDV, the simulation of trials in vitivinicultural law welcomes each year students of specialized training in France and in Europe.

Objective: Familiarize students with the practical questions of European and international law of the vine, wine and spirits, in particular by a mock trial.

Organization: The action consists in setting up an educational process which resembles a contest of contentious procedure before the Court of Justice of the EU on a case related to the law of the vine and the wine. Note that there is also keen interest for students from universities outside Europe, as the practical case will concern questions of international wine trade.

A fictitious practical case will be distributed to the participating teams. The competition is not only open to students enrolled in Master 2 at the University of Reims but it is open to students enrolled in other training at Masters level (in France or elsewhere). The idea would be to form teams that will oppose by presenting their legal arguments. The procedure will be written in a first phase and the different teams will present their defense brief. Then the two best teams will compete for the oral phase (final), according to the rules of procedure of the EU Court of Justice.

The procedural languages will be English and French. Exam rules are established each year by the jury.

The jury will be composed of the President or a Vice-President of the AIDV, a representative of the OIV, a judge (or referendum) at the Court of Justice of the European Union, an academic (outside the Universities who participate in the competition) and a personality from the professional world of wines and spirits. The jury will be responsible for writing the practical case and evaluating the teams. 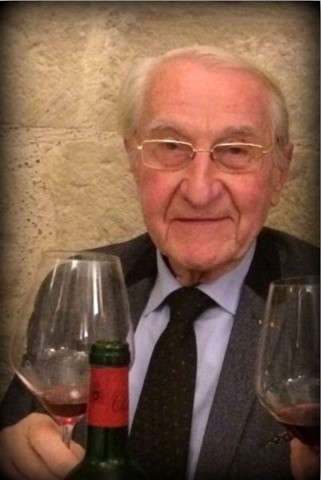 It is with great sadness that the AIDV has learnt of the death of Robert Tinlot at 86 years of age on 12 November 2017 in Dijon.
A graduate of the Paris Law Faculty and the research and development centre of the Department of Fraud Control, he began his career as General Counsel for the National Department of Control for Wines and Spirits (1964-1970), then as head of the bureau of wines and beverages at the Ministry of Agriculture (1970-1981).
Inspector General for Fraud Control, he presided the OIV "Regulation and Quality Control" Expert Group from 1982 to 1985.
His legal competencies and knowledge of the vitivinicultural sector paved the way to his presidency of the "Wine" Group (1979) and "Spirituous Beverages" Group (1984) at the Council of Ministers of the European Union, his participation in the revision of the Paris Convention with the WIPO, his vice-presidency of the FAO Wine Group (1983) and his leadership of the French delegation to the Codex Alimentarius Commission.
After becoming Deputy Director of Consumption and Fraud Control, in 1985 he was elected OIV Director General and occupied the post until 1996, developing the activities of the Organisation, which grew from 33 Member States to 46 during this period.
Passionate about history and wine law, and proud of his Burgundy origins, he created the first wine law course in 1971 and loved sharing his passion with students in oenology, economy, agronomy or law at numerous French universities. This is how he came to be at the heart of the initiative to create the International Wine Law Association (IWLA) in 1987 and the International University Association of Wine (AUIV), which took charge of the OIV Master's in Wine Management.
A great diplomat, he leaves us with the memory of a passionate and inventive OIV Director dedicated to the service of the world of vine and wine that he knew so well.